skip to main | skip to sidebar

Losing Our Corner Of The Crystal Skull Market 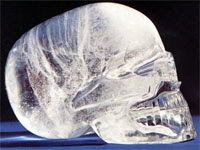 Maybe we need to be putting in a call to Isaac Tigrett to see if he’ll put his crystal skull back in The Pyramid.

On February 10, we wrote about the crystal skull that was discovered in the apex of The Pyramid and removed in the early days of the iconic building. That post was largely a tongue-in-cheek commentary about the cosmic risk of removing the skull.

Perhaps, we spoke too soon. After all, we seem to be the midst of crystal skull frenzy, and we missed our change to get in on the ground floor.

First, there was “Indiana Jones and the Kingdom of the Crystal Skull racking up more than $300 million. Then, two weeks ago, the Smithsonian opened its crystal skull exhibit, and now, the museum plans to premiere its documentary, “Legend of the Crystal Skulls,” in September. Now we learn that there are crystal skulls on exhibit in the British Museum in London and the Musee du Quai Branly in Paris.

Star of the Smithsonian exhibit and the film is a crystal skull that arrived in the mail at the Smithsonian 16 years ago. It was in a package addressed to “MezoAmerican Museum” and a letter said it was made by the Aztecs. Neither the museum or the skull was real.

In other words, the nation’s foremost museum system have taken a fake and turned it into a franchise. If only we had been so clever.

Some say the skulls are from Atlantis. Other say that if all of them come together at the same place, they will release all knowledge and stop computers. Some say they were made by Mayans or maybe even extraterrestrials.

And yet, if the skull has any power, it is its ability to inspire myths and legends. In that, it has something in common with The Pyramid. For 17 years, we’ve harbored the myth that it can become a 365-day a year tourist attraction.

The most ominous warning was given by Isaac Tigrett following the removal of the crystal skull that he had secretly riveted to the steel superstructure of The Pyramid apex. The small black box was spotted by a maintenance man about a year after the arena had opened.

Pried from its secret place, the box was opened (the momentous event was filmed) with great ceremony in a conference room in the bottom of The Pyramid, and inside the velvet-lined box and covered with gauze dusted with a fragrant powder was a small crystal skull.

Because of Mr. Tigrett’s interest in Eastern mysticism, it was immediately obvious who put it there. Although the skull seemed to have more in common with those allegedly found in Mayan archaeological sites, city and county officials were told that the skull had materialized in the hands of Mr. Tigrett’s guru, Sathya Sai Baba, during a conversation.

After all, the founder of Hard Rock Café and House of Blues had a special debt to the Indian mystic, who protected him during a devastating car wreck in California. Hurtling off the road in his sports car, Mr. Tigrett said that Sai Baba appeared in his car, put his arms around him and protected him from harm. The car was destroyed.

In other words, the crystal skull’s connection to the religious leader and guru gave it special power, which was amplified by the additional force of The Pyramid itself, according to Mr. Tigrett. “You don’t have any idea what you have done,” he said upon being told that the crystal skull had been removed, adding somberly that the cosmic balance of the earth could be disturbed as well.

By that time, suggestions that removal of the skull could curse The Pyramid were laughable. After all, with the crystal skull in place, little had gone right there.

If Memphis had been interpreting signs, perhaps there wasn’t one delivered more forcefully than the thunder storm that postponed the “Big Dig” extravaganza to kick off construction. A native American telephoned city and county officials with a warning - the Pyramid site was sacred and that the rain was an omen of worse things to come.

Officials joked about the warning for days. Two years later, no one was laughing. Construction had been delayed, the price had increased, and the shape-shifting Shlenker/Tigrett development was no closer to coming into focus.

The Great American Pyramid plan was essentially dead. So was the Hard Rock Café; the glass inclinator to the apex; the perverse mutation of of Egyptology and rock music into Rakapolis; Dick Clark’s American Music Awards Hall of Fame; a re-creation of the Cavern, ground zero for Beatles fans, and priceless Stax Records artifacts; an Omnimax theater; a light and music spectacle in the arena on non-event days; a radio station on the top of the building beaming shortwave Memphis music; and what became called the “scheme du jour,” ideas that often became inoperable before the end of the business day.

The private partnership finally cratered and the public sector scampered to get The Pyramid opened in time for Memphis State University basketball. But first, there was the grand opening. Once touted by Mr. Shlenker as Luciano Pavarotti in Aida, complete with elephants and grandeur, the opening instead starred the Judds, who came all the way from Nashville.

Arena officials had been referring to opening night as their “baptism by fire” because of the rushed opening schedule. In the end, it was a more traditional baptism – by water. When the packed house stormed the restrooms and flushed the toilets at the same time, it was too much for the city sewer transfer station, which flooded the arena floor with water of varying degrees of sanitation, giving birth to the so-called Pyramid test now conducted in all new arenas.

From the beginning, it was clear that the seats were too narrow (required when the arena capacity was increased by 2,000 seats to get the deciding vote from County Commissioner Pete Sisson), the angle of the upstairs seats was too severe (a pregnant woman fell down the darkened, unlit aisles), the track seating adjacent to the floor seats wasn’t used in arenas any more and conjured up images of rodeo seating; the private suites were on the public concourse which devalued their exclusivity, and the sound was in a word, atrocious.

The gallows humor at The Pyramid was that a concert ticket was a bargain, because you got to hear two concerts for the price of one – the actual concert and the one that bounced off the ceiling about 15 seconds later. A lawsuit and millions of dollars later, the acoustics were improved, but not before some promoters decided that there was a hex on the building.

A door at ground level was cut into the south side of the building for disabled guests. Technically, the ramps into the building met building code, but after a Pyramid manager was unable to move up the ramp on a wheelchair, the new entrance was added and handicapped parking was redesigned.

In addition to basic acoustics, the sound system and lighting for basketball games had to be upgraded. More than once, it was muttered that the building was cursed, particularly after someone fell to his death from the rigging and a gunman holed up on the ground floor.

But the dream of a Pyramid attraction doesn’t die easy. Island Earth was killed off by politically connected Herenton supporters who didn’t like the idea of an eco-attraction (the inconvenient truth is that it now seems to have been ahead of its time). As a result, the Wonders exhibit seemed like a godsend when it moved to the north wide of The Pyramid from the convention center. Within a few years, it shut its doors with a debt of more than $1 million.

We may have laughed off the discovery of the crystal skull and chortled at the curse, but now, almost 20 years after The Great American Pyramid was first proposed, who’s laughing now?
Posted by Smart City Consulting at 8:18 PM

To start with I would like to congratulate the creators of this blog, mainly because when I read it I enjoyed it very much.A few years ago I attended a conference called guanacaste costa rica real estate, at that conference had many interesting topics. Perhaps readers may find no relationship between the blog and this conference, but if someday can attend,would realize that there is much to do with this blog.

Hello .. firstly I would like to send greetings to all readers. After this, I recognize the content so interesting about this article. For me personally I liked all the information. I would like to know of cases like this more often. In my personal experience I might mention a book called Generic Viagra in this book that I mentioned have very interesting topics, and also you have much to do with the main theme of this article.

“Legend of the Crystal Skulls,” is one of the my favorites stories, my father comeback from Egypt and he told me this story !!